The book is a relative newcomer in western society. It began its career in the mid-15th century and its future is no longer certain, threatened as it is by new inventions based on different principles.’

These words come from Lucien Fevre’s preface to The Coming of the Book, published in French in 1958.  I’m reading them sixty years later, sitting on a train using a portable computer, with the aid of a repository of electronically scanned volumes, which makes instantly available an unreadable number of published works, not to mention millions of pages of ‘unpublished’ electronic texts.

The irony of this situation is remarkable. 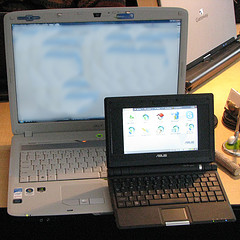 The first irony is that the computer I am using is called a notebook. That is, conceptually the new invention is not ‘based on different principles’ but explicitly pays homage to the old, even as it radically undermines it. Now that the netbook craze is upon us, we are doing the same thing. The striking thing about the new cut-down mini-notebooks such as the Asus eee PC and now the Dell Inspiron 910 is that they are trying very hard indeed to be the same size and weight as a paperback book (remember that the paperback was the new reading technology of the 1930s). And we seem to be desperate to keep calling them books. As with the last major shift – from scroll to codex – it seems that while the technology may change, the name remains the same. If we call it a book, even though a netbook, does it remain one?

The scribes endure too 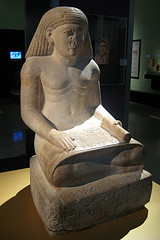 The second irony is that mindful of legal considerations the electronic repository in question – Google Books – has artificially hobbled a piece of already existing technology that would effortlessly allow copying of the text. The result is that when I want to reproduce a quotation, as above, I need to copy it out by retyping it manually, letter for letter, word for word, in a manner strongly reminiscent of the working practices of the monastic scribes who dominated the book industry before the coming of the printing press, let alone the coming of the computer. Now, through the use of the reCAPTCHA security process, this activity of scribal rewriting has been massively distributed, so that every time someone spends ten seconds verifying they are human, they contribute to digitally transcribing the equivalent of one hundred and fifty printed books per day. (according to Luis Von Ahn of Carnegie-Mellon University).

Third, it’s easy to overlook the ambiguity of the original French title. Translated as the ‘coming’ of the book, the original French word is ‘l’apparition’, which can equally be translated ‘appearance’ and which has a double meaning in both languages. Does the e-book you hold on your lap actually amount to a real book which has almost magically ‘arrived’ inside your computer, or does it only have the ‘appearance’ of a book?

So who’s imagining whom? 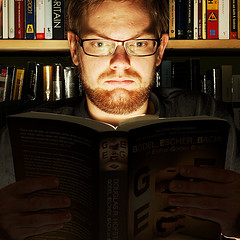 Is the netbook a book just because we say it’s a book? Perhaps, conversely, there is something so compelling about the concept of a book in our culture that it simply refuses to lie down and die, transmuting instead into something very different, but eerily the same. As James Wood says,

‘a good proportion of reality consists of what we freely imagine; and then, less happily perhaps, we discover that that reality has imagined us—that we are the vassals of our imaginings, not their emperors or archdukes.’