I find it amazing that the words of Prof Michael Reiss, taken out of context and wilfully misunderstood by people who ought to know better (Richard Roberts and Harry Kroto) have resulted in his resignation as Director of Education at the Royal Society.

It seems he resigned in spite of the fact he was doing no more than stating Royal Society and Government policy.

The letter sent by Roberts and Kroto is substantively little more than an accusation that Reiss is a member of the clergy.

This amounts to a witch hunt of the utmost intolerance. It is not reasonable or helpful for people to behave as though the best way to teach science is to avoid talking about certain issues. This approach will clearly only lend fuel to creationists who will no doubt say “see, their arguments don’t stack up so they just won’t talk about it!” 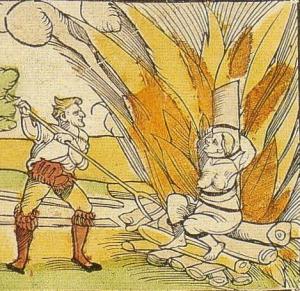 Much better is the approach supported by the Royal Society itself and restated by Michael Reiss, which is, as I understand it, to use student questions about creationism as an oportunity to discuss the science underlying current views of the origins of the universe.

“If a young person raises creationism in a science class, teachers should be in a position to explain why evolution is a sound scientific theory and why creationism is not.”

I agree wholeheartedly with Lord Winston, who said:

“This is not a good day for the reputation of science or scientists. This individual was arguing that we should engage with and address public misconceptions about science – something that the Royal Society should applaud.”

Reportedly, Richard Dawkins thought the appointment of an ordained Church of England priest to the role of Royal Society director of education was like a Monty Python sketch.

Dawkins notices a witch hunt is going on, but still supports it:

‘Michael Reiss is also an ordained minister. To call for his resignation on those grounds, as several Nobel-prize-winning Fellows are now doing, comes a little too close to a witch-hunt for my squeamish taste.
Nevertheless – it’s regrettable but true – the fact that he is a priest undermines him as an effective spokesman for accommodationism: “Well, he would say that, wouldn’t he!”‘

This term ‘accommodationism’ is interesting when used by Dawkins. He divides scientists into two camps: ‘the accommodationists, who ‘respect’ creationists while disagreeing with them; and the rest of us, who see no reason to respect ignorance or stupidity.’

So if we do not respect creationists and will not therefore talk with them about creationism, what are we supposed to do with them?

Sociologist Michael Thompson has suggested (sorry I can’t find the reference right now) there are two big questions in the world these days: how to live with people you can’t kill and how to kill people you can’t live with.  My concern in all this is that when we stop talking to people we are well on the road to answering the latter question rather than the former. When we live with people we can’t kill, we usually find that we have to talk with them, and sometimes even listen.

It seems strange that Dawkins should want us to stop talking to Creationists, since he himself has been rather keen to debate and argue with them.

It’s all the more ironic then that Dawkins’ own web site has just been banned in Turkey by a Turkish judge for, arguably, insulting an anti-evolution writer (and serial litigist):

‘I am at a loss to reconcile the expensive and glossy production values of this book with the “breathtaking inanity” of the content . Is it really inanity, or is it just plain laziness – or perhaps cynical awareness of the ignorance and stupidity of the target audience – mostly Muslim creationists. And where does the money come from?’

Voltaire – where is he when we need him?

We need to talk, and discuss and debate and argue, in schools and universities, on the internet, and everywhere we can, no matter if we have to go over the same issues a thousand, ten thousand times. The alternative is a shutting down of debate that can only play into the hands of those who want debate banned. They, not the ignorant, are the enemies of knowledge.

Harry Kroto, one of those who campaigned for Reiss’s resignation, reportedly said:

He’s right that scientific approaches to knowledge have some very serious opponents, but completely wrong to suggest that the defence of the Enlightenment involves closing down discussion in schools.

The Turkish web site case is a good example of free speech being curtailed. But the only way to stop this sort of thing is to steadfastly promote freedom of speech -even when the speakers speak wrongly.