Is there a sense in the Vatican’s reply to the rumours about the Pope’s clothing choice that he shouldn’t be wearing designer accessories? Why not? It is restated that he’s a ‘simple and sober’ man, when in point of fact he isn’t: he’s the Pope. A simple man wouldn’t wear all the outfits that popes traditionally wear, Prada or no Prada. 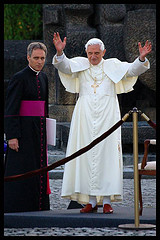 The reason for the disclaimer is that the Catholic Church is the quintessential Hierarchical organisation, and as such the leadership must be seen to be institutionally splendid while also personally unremarkable. Opulent vestments are permissible but signs of individual ostentation, or indeed, individuality, are slightly distasteful and  off-message. This is in stark contrast to the way the mass media treats the Pope. With its Individualist orientation, the media obviously sees the Pope as a celebrity, and his shoes and shades are to be celebrated as making him more uniquely him. Anything the Pope does to subvert the uniform is great, and newsworthy – at least to Esquire Magazine, which made him ‘accessorizer of the year‘ (‘have a signature… make it your own’).

This seems a fine line to tread. The trick seems to be to act like a star while denying you’re one, and hope we won’t notice the incongruity. How’s he doing?