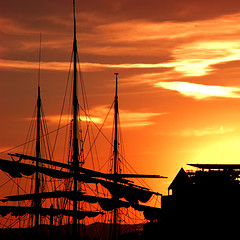 Economist Peter Leeson has a new book coming out about the economics of piracy in the late 16th and early 17th century ‘golden age’. He uses piracy as a test case for the claim that rational choice economics is what motivates much of human behaviour. In an article on the same subject, he writes:

‘“Pirational choice” differs from rational choice only in that it deals with rationally self-interested decision making in the uniquely piratical context.’ (Leeson, 36)

The book has a great title, But is he right?

‘Eccentric pirate practices were in fact rationally-chosen responses to the conditions pirates confronted in their criminal pursuit of profit.’

Without wanting to deny the significance of this argument, I think there is more to it than that. We are really dealing with a particular type of bounded rationality. The boundedness of ‘pirational‘ behaviour is well described by grid-group cultural theory. From the ‘four cultures perspective’ of grid-group cultural theory, it is mistaken to assume there is only one kind of human rationality. There is more than one way of behaving rationally, and the four available approaches to surviving and thriving are mutually exclusive. Pirates didn’t merely operate with rational self-interest in view, they were also swayed by a strong commitment to an Egalitarian world view. They established a number of utopian quasi-national jurisdictions (pirate cities to you), where the laws of England, Spain and France did not apply.  Not only was this view not shared by the Individualist trading ship owners and the Hierarchist governments of the European empires, it was very actively opposed.

To give three examples of how there was a clash of worldview on the high seas:

First, one of the great questions conditioning social organisation is ‘how much is there?’ An opinion on this matter leads to decisions about the level of group belonging and grid structure. Leeson assumes pirates co-operated and shared because it was economically efficient to do so.

The articles of Bartholomew Roberts’ crew bear this out: “Every Man has a Vote in Affairs of Moment; has equal Title to the fresh Provisions, or strong Liquors, at any Time seized, and may use them at Pleasure, unless a Scarcity make it necessary, for the Good of all, to vote a Retrenchment.” (Captain Charles Johnson) – A General History of the Pyrates, Edited by Manuel Schonhorn, (London, Dent, 1972), p. 211

Note though that scarcity is at issue here. Grid-group theory suggests that perceived scarcity is what drives egalitarian social organisation. However, if riches were widely available, how is it that pirates maintained their solidarity with one another?

“These Indyes are so Vast and Rich, And this kind of rapine so sweet, that it is one of the hardest things in the World to draw those from it which have used it for so long.”(Rediker, Devil and the Deep Blue Sea, 255).

Such a cornucopia should have led to an Individualist world view prevailing, and in the case of the merchant syndicates, it did.

Second, there was a mismatch between Egalitarian and Hierarchical social structures.The flattened social structure of the pirates, in which the pirate captain typically only received one and a half share of treasure, and had his power reduced by the role of the quartermaster and by universal voting, was at odds with the deeply hierarchical structures of the empires they fought against and to some extent sought to replace. When th forces of these Hierarchies struggled against the pirates, they misunderstood their structure and made strongly hierarchical assumptions about them:

‘By 1717 England not only rewarded individuals for defensively resisting pirate aggression; it also rewarded them for offensively initiating aggression against pirates. The proclamation of these rewards was published in the Boston News-Letter and awarded “for everyCommander of any Pirate-Ship as Vessel the Sum of One hundred Pounds; for every Lieutenant,Master, Boatswain, Carpenter, and Gunner the Sum of Forty Pounds; for every Inferior Officer the Sum of Thirty Pounds; And for every Private Man the Sum of Twenty Pounds”’ (Boston News-Letter December 2-December 9, 1717). Quoted in Leeson, 25.

Third, there is another worldview, Fatalism, that takes it as impossible to know how much resources will be available in the future. This being the case, the best strategy is to throw oneself upon the whims of fate, to trust to luck:

“In an honest Service, there is thin Commons, low Wages, and hard Labour; in this, Plenty and Satiety, Pleasure and Ease, Liberty and Power; and who would not ballance Creditor on this Side, when all the Hazard that is run for it, at worst, is only a sower Look or two at choaking. No, a merry Life and a short one shall be my Motto” – Pirate Captain Bartholomew Roberts. (Johnson 1972, 244)

For Leeson, such a claim may well seem like the summary of a rational risk assessment exercise. The main risk is ‘a sower look or two at choking’ – a slim chance of being hanged. However, note that the pirate Bartholomew Roberts sees life as short, and early death as almost inevitable. The key word in this risk assessment, ‘Hazard’, is not about rational choice but about Fatalism.

In summary, the Individualist trading syndicates, the Hierarchist maritime empires and the Egalitarian (or sometimes Fatalist) pirates all had different approaches to social organisation, which biassed their economic rationality in one of four directions. These biases are better explained by grid-group cultural theory, with its pluralist (but not relativist) account of rationality, than by rational choice theory, since only grid-group cultural theory really engages with the social mechanisms of bounded rationality.

Read the following for more: