I’m still thinking about fatalism as one of the four cultures of Grid-group cultural theory.

Even in the United States, whose mascot is Lady Liberty, not Lady Luck, and don’t we all know it, there is clear evidence of fatalist activism.
Nassim Taleb and the ‘epistemic arrogance‘ of anti-fatalists

Nassim Taleb is certainly a man of the moment. Having long predicted that financial markets would come to no good by arrogantly ignoring the possibility of catastrophe, he’s been proved fairly conclusively right, and should now feel justified in gloating. Oh, he already is gloating…
Taleb is a Fatalist almost to perfection. The opening paragraph of his website says:

‘You may not be able to change the world but can at least get some entertainment & make a living out of the epistemic arrogance of the human race’.

The rest of his work reads like the Fatalists’ manifesto. The title of ‘Fooled by Randomness‘ says it all but Taleb just keeps going.
And it isn’t as though Taleb is the shy type, slow to make policy or organisational recommendations. He is trenchant, polemical and opinionated in the best sense of those words. If you want to know what fatalist activism – a social or political program based on fatalism – would look like, just read Taleb. His central thesis is that highly improbable events happen much more often than anyone except Nassim Taleb (and possibly Bernard Mandelbrot) would think. Luck rules. And looking at the wreckage of the economy, he seems to have a point.

“The future will be increasingly less predictable, while both human nature and social ‘science’ seem to conspire to hide the idea from us.”

Writing off Fate
So why is it that the developers of grid-group cultural theory more or less wrote off fatalism as an organisational possibility? For them (especially Douglas, Wildavsky and, still, Thompson) it was always ‘passive’, inactive, withdrawn from policy debates. Of course, fatalists make out they’re just shrugging their shoulders and saying ‘what the heck’, that they can’t influence anything anyway (they may not be able to change the world – remember?) but that’s no reason to actually believe them! Behind the scenes (or in front, if you’re Taleb) they’re busy perfecting ‘contrived randomness’ – making the world seem even more random and fate-controlled than it otherwise would do.
I think the omission of fatalism from such accounts of organising amounts to what Michael Thompson in his latest book, Organising and Disorganising, terms ‘information rejection’. A cultural bias is recognised by what it rejects, and by and large, these writers are not at all Fatalist in outlook. Therefore Fatalism and Fatalist ways of organising represent  ‘uncomfortable knowledge’ (Steve Rayner) that is to be rejected. 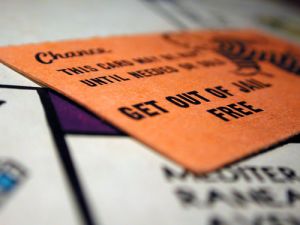 Nothing to contribute?
A counter argument might be that, as  Mary Douglas suggested, the high grid, low group quadrant is populated by those who are controlled by social norms but are alienated from any group – they are ‘isolates’. By definition, then, they are not in a position to engage with debates about policy, or politics, or management, or, well, anything, so they can safely be excluded from analysis. They have nothing to contribute. Think of prisoners, whose lives are strictly controlled by the system (high grid), but who have no say in anything, and no affiliation to anything around them (low group).

But I’m arguing that the very existence of these people speaks volumes in its own right. They are not just sitting there doing nothing, but present a vision (mostly a negative vision, at least for me) of a world in which choice is a fantasy and luck the only hope. The other three worldviews, egalitarianism, individualism and hierarchy, need this fatalist netherworld in order to demonstrate what will happen if their social norms are broken. They call this ‘deterrence’.

The Fashion of Fate

But that’s not all. Think for a moment about this supposedly impotent culture, in which everything is pointless because you can’t change anything and the only winning strategy is to keep your head down and roll with the punches. Then think about fashion – not exactly a cottage industry. Prison culture has dominated the fashion of adolescent males for at least sixty years, if not more. Where I live, many thousands of miles from an American jail, young men’s underwear is routinely on display simply because in the US, prisoners routinely have their waist belt removed from them. From the jails, via hip hop, to a street near you. Uncomfortable as it may seem to those of us who are (usually) not Fatalists, Fatalism is widely regarded as something to aspire to. Not only does US prison have a culture, paradoxically this culture of having no influence is highly – and globally –  influential.

It’s odd, I think, that the grid-group cultural theorists were unwilling to accept at face value what their own typology was telling them – that there is a high-grid, low group quadrant and it’s important. But in a way it’s no odder than the very common tendency to ignore egalitarian environmentalists in favour of either markets or hierarchies. Or to ignore contracts in favour of familial obligations. It’s odd, I think, to claim that fatalists withdraw from policy debates, while at the same time insisting that Individualists do not withdraw from such debates. But why would an Individualist want to get involved with ways of organising society? As Margaret Thatcher said, there’s no such thing! Surely the term Individualist suggests a person, a culture that devalues the very idea of social organisation. Surely the concept of Individualist organisation is even more unlikely than Fatalist activism. But somehow we can easily see that this is not the case – individualists very actively organise themselves and others to make the world a better place for individualists to live in (think of Charlton Heston running a huge association of rugged individualists with guns – incongruous, but not so incongruous that we particularly notice). Why then shouldn’t fatalists, in their fatalist way, be doing exactly the same – working with the inevitable social transactions in order to favour their own worldview?

A prescription for change

My prescription  for those who work with the paradigm of grid-group cultural theory, and for anyone else who’s made it this far into such an over-long post, is to re-evaluate the significance of Fatalism for their work, and to start to take it seriously, to include it, even though this knowledge is distinctly uncomfortable. In spite of itself, grid-group cultural theory still points to four, not three or two, ways of seeing and organising the world, and one of it’s great strengths is that it challenges us to see what we don’t want to see.

In an earlier post I wrote of Australia as a prime example of a ‘fatal nation’, where fatalism dominates policy discourse. But isn’t it ironic then that America, the Land of the Free, the Individualist’s paradise, is also home to the high priest of Fate, Nassim Taleb? But then isn’t this the same Land of the Free that also has one of the highest prison population rates on earth?

Oh, and I thought I was going to have time to mention Vegas…

6 thoughts on “Fatalism in America today”