Sydney auxiliary Bishop Julian Porteous on the virtue of discrimination.

Fourcultures has written on this line of thought before –  only discriminate: four versions of justice

A Hierarchical world view laments the good old days when discrimination was  a virtue not a vice, since discrimination, so it is argued, is the very important act of judging between right and wrong. The problem not acknowledged by the bishop is that there is a difference between holding views on contentious moral issues (perfectly reasonable) and being paid by the government to promote these contentious views in schools and elsewhere (less reasonable).

A previous post noted that the Egalitarian world view tends to see discrimination as the thin end of the wedge, since the kinds of moral clarity and purpose proposed by Heirarchies have subjugated and oppressed people for centuries. Take the Bishop’s words, for example. He has a negative opinion of:

the view that all people, all ideologies and all behaviours have equal merit and, therefore, an equal right to exist. When there is no such thing as basic right and wrong, then any judgement of another becomes negative discrimination.

There is something to be said for the recommendation that if you want to hold the moral high ground, if you want to discriminate on the basis of some kind of superior understanding of the Good, you should do so with your own money and not with the tax revenue of people who disagree with you – but the bishop isn’t saying it. Indeed, the bishop shouldn’t say it since it is clearly in the interests of his organisation to use other people’s money for precisely as long as the government will let them get away with it.

Oh for the good old days when we all knew the difference between right and wrong.

Colin Allen spoke about Robot morality at the Adelaide Festival of Ideas.

This relates to The Ethics of Autonomous Robots.

Further to a recent post about the ethics of autonomous robots, it seems military robots are not the only kind that can kill, allbeit by ‘mistake’. In Japan there are already robots that feed the elderly and baby-sitting robots in shopping centres. So who exactly should be held responsible when they go wrong? It’s an issue that has concerned Noel Sharkey of Sheffield University for a while (he and Ronald Arkin were interviewed for the radio recently), and now the Royal Academy of Engineering has weighed in with a discussion report.

It’s an interesting read, but it doesn’t begin to ask the kind of questions grid-group cultural theory might…. END_OF_DOCUMENT_TOKEN_TO_BE_REPLACED

Dan Kahan of the Cultural Cognition Project has been thinking about the possible ways of reacting to robots that kill. It’s a relatively new set of technologies, but what happens when AI merges with weaponry to produce robots that want to kill you? He thinks the arguments could go in several ways and I tend to agree.

The ethics of this is already being worked out, with the aim of making robots behave ‘more humanely than humans’. There is a summary.

The title of a key book on the subject points to the potential contradictions:

The context in which all this is happening is an Hierarchical one: the so called military-industrial complex. Hence the great significance of the term ‘Governing’. For Hierarchy, governing is exactly the correct response to ‘lethal behavior’ – and this applies to all lethal behaviour, not just that of robots, who in a sense are nothing special. The point is, in the Hierarchical worldview violence is warranted, provided it is clear who is doing the warranting. But lethal robots present something of a problem. What happens if they aren’t programmed to be ‘governed’? END_OF_DOCUMENT_TOKEN_TO_BE_REPLACED

In a world that’s going to the dogs it’s reassuring to see that the defenders of  ‘an alternative protocol for high value detainees’ actually believed in it. Heaven help us had they turned out to be cynical and morally bankrupt manipulators. Take that, foreign barbarians! 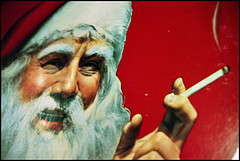 Marketing, whether of a product or an idea, can be overt or it can be covert.

In the former everyone can see what’s happening and can willingly consent to it. The latter, though  can become out and out manipulation. Mostly, there’s a big grey area in between. END_OF_DOCUMENT_TOKEN_TO_BE_REPLACED

A while back Rabbi Jonathan Romain wrote thoughtfully on some Jewish approaches to the existence or non-existence of God.

The heading of this article is ‘Jews don’t have to believe – if they do what he says’. And clearly this needs a little unpacking.

It may make a certain sort of sense to ‘do what he says’ if you believe in the kind of God who expects obedience. But what if you don’t? If there is no ‘he’ what is the justification for keeping his law? Three questions arise in particular.

First, It’s fairly obvious that if you insist on obeying the commandments of a deity whose existence you deny, and have no considered reasons for doing so, you are in an untenable position in the long-term. So could there be good and sustainable reasons for this behaviour?

Second, there is an aporia in Romain’s piece – a question going begging. At the start he writes as though a decline in synagogue attendance is some kind of problem to be lamented and he identifies Jewish atheism or agnosticism as the culprit.

‘No wonder they do not come back to pray to a God they reckon is absent.’

But by the end, he seems to be excusing the non-attenders on the grounds that Judaism isn’t consensually about belief in any case. The lingering question, then, is whether it matters that synagogues are reportedly emptying. And if it does, would a return to dogmatic belief be any kind of solution, or just promote further alienation?

Third (or eighth and ninth if you’re actually counting), the tradition itself does seem to have an ongoing debate about the significance of attitudes to rules, which Romain seems to skip over rather lightly. This was why the Christian Reformers critiqued what they saw as the ‘legalism’ of the Roman Catholic Church. As they read the Bible for themselves, especially the Prophets, they became exposed to a strand of religious thought that prioritised disposition over practice, epitomised by the rather ungainly but significant metaphor of the law written in the heart. This debate continues into the present. Is it enough merely to keep the letter of the law? Don’t you also need at least a little respect for its spirit?

One partial resolution of these questions might be to see religious observance as a kind of game to be played.

Like any game it’s more fun if you have a set of rules, and almost impossible to continue if you don’t. It’s interesting that almost no one claims a supernatural being invented the rules of games, and yet game-playing is massively and enduringly popular. Conversely, the experience of being coerced into playing a rule-based game, as in a million school sports lessons in the rain, is usually very negative; it’s only when we freely consent to the rules, without authoritarianism, that the game becomes enjoyable. As anyone who has played games will tell you, the rules look fixed but really they’re contestable, and the evolving debate about the rules is a significant part of what makes the game socially worthwhile. Finally, and perhaps more than anything else, it’s a social thing: if you won’t play along, you’re missing out on all the fun.

Perhaps if synagogues and churches were more like that – more ludic in their disposition – they’d have more punters.

The forthcoming TV drama God on Trial gives an example of a seriously playful approach to the problem of evil.

Objectors might argue that a really significant difference between a religion and a game has been overlooked: the difference being the divinity itself. After all, who ever heard of people getting together to behave as though fictional beings really existed? Actually, this is the main premise of fantasy role-playing games. These have taken the Internet and what used to be called ‘the younger generation’ by storm and may well point towards a viable future for religious practice. A concern would be that these ‘massively multiplayer games’ seem to encourage, to put it mildly, a certain lack of ethical seriousness. But hasn’t this always been the dilemma of religionists in an ethically frivolous world? And in any case, with a few notable exceptions this concern probably mistakes form for substance. Beneath the pixie dust and hidden deep in the alien bases lies a far-reaching ongoing experiment in character formation (a phrase the fans of Ignatius Loyola and Gary Gygax would be equally comfortable with). Far from denigrating ethics, games and their rules can actually establish an environment in which ethical behaviour is modelled, learned, and even mastered. In realising this aspiration the games known as religions can and should play an important part.